Our Purpose and Mandate

FORCE is Canada’s lead research facility for tidal stream technology, created to better understand how this technology can play a role in Canada’s clean energy future and help respond to climate change impacts (like ocean acidification, sea level rise, and coastal erosion). At its test site in Minas Passage, Bay of Fundy, FORCE provides offshore and onshore electrical equipment to connect devices to the power grid, and conducts monitoring and research to understand any potential environmental effects.

FORCE is a private, not-for-profit company operated by a staff, governed by a board of directors, and guided by input from an independent Environmental Monitoring Advisory Committee and a Community Liaison Committee. FORCE has received support from the Government of Canada, the Province of Nova Scotia, the Offshore Energy Research Association, and participating developers.

FORCE is located in Mi’kma’ki, the ancestral and unceded territory of the Mi’kmaq, covered by the “Treaties of Peace and Friendship” which Mi’kmaq and Wolastoqiyik (Maliseet) People first signed with the British Crown in 1725.  Mi’kmaw Peoples have lived on and cared for this land for over 13,500 years.

Since 2009, FORCE has conducted an independently-reviewed environmental effects monitoring program as well as a series of applied research programs, including the use of underwater sensor platforms to advance the science of data capture in high flows. All monitoring reports are available online.

Learn more about our goals & objectives 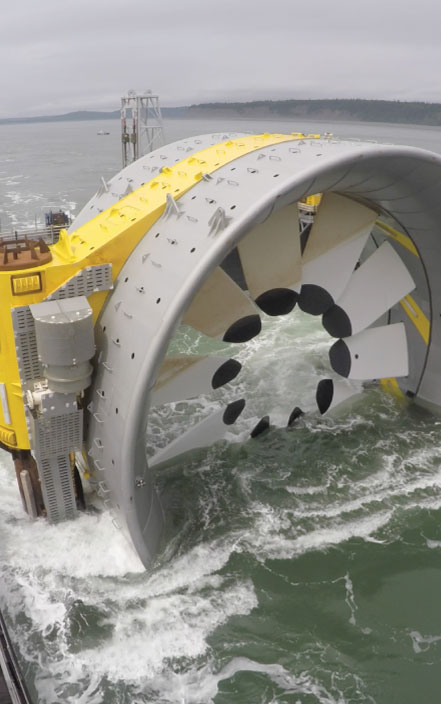 We are a catalyst to the advance of tidal stream energy technology.


Our shared infrastructure consists of four berths connected by submarine cable to shore-based underground cable ducts and an electrical substation. Our facility is connected directly to the Nova Scotia electrical grid via a purpose-built 10 km transmission line. Our 370 sq m facility houses both a visitor centre and research facilities.


FORCE’s test site is in the Minas Passage area of the Bay of Fundy near Black Rock, 10 kilometres west of Parrsboro, Nova Scotia. Minas Passage, only 5 km wide and bordered by basalt cliffs, is the entrance to Minas Basin, the region of the world’s highest tides.

At mid-tide, the current in Minas Passage is about 4 cubic kilometres per hour, the same as the estimated combined flow of all the rivers and streams on Earth combined.

About 160 billion tonnes of water flows through the Bay of Fundy each tide, equal to four times the estimated flow of all the freshwater rivers in the world combined.

With the incoming tide, the current in Minas Passage can exceed 20 kilometres an hour, as approximately 14 billion tonnes of sea water flows through Minas Passage into Minas Basin, and central Nova Scotia tilts slightly under the immense load.

Considered ideal for tidal stream devices, the site was selected after roughly 12 months and $1 million in research. Nova Scotia Power tested a 1 megawatt OpenHydro turbine at this site between November 2009 and December 2010.

The land-based facility is open to the public from May to November.

“If a turbine can produce power under these conditions, and produce it safely and reliably, it has met the Fundy Standard.”

If tidal technology moves from R&D towards larger-scale development, turbine reliability will become a critical feature to long-term viability. The FORCE test site may represent the ultimate test of reliability – the Bay of Fundy has been called the “Everest” of tidal energy. Tidal devices operating in here endure tides moving at speeds up to 5 metres per second, rising up to 16 metres vertically, and expanding up to 5 kilometres horizontally. During peak flows, turbines will experience forces similar to a class 4 hurricane – under the water.

Tidal stream energy devices use the flow of the water as a source of power, the way a windmill uses wind. They do not need to spin as fast though, because water is roughly 800 times denser than air. Power increases exponentially with speed; every time water speeds double, power goes up eight times. Tidal stream technology is:

The Fundy Advanced Sensor Technology (FAST) program was created to advance the science of site measurement in high flows, providing industry, scientists and regulators with the ability to evaluate – and operate in – extreme sites like the Bay of Fundy. FAST includes a series of three underwater monitoring platforms that use a variety of onboard sensing equipment to advance efforts to:

A History of Innovation


Harnessing the power of the tides is not a new idea. As early as the 11th and 12th centuries, tidal mills were built in Britain, France and Spain.

There were a number of tidal mills active in the 17th century along the Bay of Fundy. Since 1984, Nova Scotia has been home to one of just three tidal power plants in the world and the only one in the Western Hemisphere (the other two are in France and Russia).

The 20 megawatt Annapolis Tidal Power Plant has a daily output of roughly 80-100 megawatt hours, depending on the tides. The Annapolis technology is very similar to a conventional hydro-electric dam, called a barrage. The tidal plant funnels water into the tidal generating plant and through a large turbine as it flows out with the ebb tide.

A mill powered partially by tidal energy was built in Nova Scotia, converting roughly 25 to 75 kilowatts of power.

Work began (but was later abandoned) on a proposed 350 megawatt Passamaquoddy Bay tidal project along the US-Canada border.


Our Board of Directors consists of technology developers testing with FORCE, one representative from the Province of Nova Scotia, and independent directors with experience in a variety of relevant disciplines.


The independent Environmental Monitoring Advisory Committee (EMAC) studies potential turbine effects on the environment. Membership includes representatives from scientific, First Nations, and fishing communities. EMAC is intended to look at the design of the project and monitoring its effects through an adaptive management approach.

Adaptive management allows for continual program improvement – from the design of the project to the monitoring process itself – revising and adapting as the results come in. This ensures that the most relevant information on environmental impacts is being measured and evaluated, and allows input from expert scientific knowledge and traditional ecological advice to guide the process.


The Community Liaison Committee (CLC) links the project to the Cumberland community, sharing information on test site, developer activity, and the community. This continues to be an effective forum to resolve issues, stay informed, and work collaboratively. CLC membership includes the general public, local government, fishers, and members of the Mi’kmaq community.

Our CLC members meet regularly, hold membership on an annual term and adhere to our CLC terms of reference.